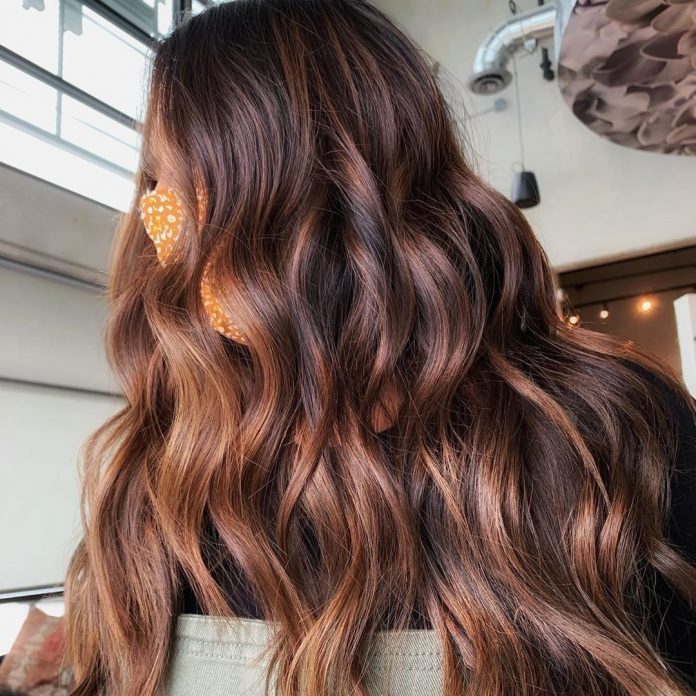 Brown hair comes in many different tones, colors and aesthetics. Brown isn’t just brown anymore! Personally, we love that hair color can be so specific and have so much personality on its own. This year in particular there are a lot of different shades of brown that are trending. One of those trends? Cinnamon brown hair. Scroll through for some ideas on how to try the trend yourself!

Ahhh balayage, does it ever get old? We sure don’t think so. Balayage is a favored hair coloring technique because it gives such incredible dimension to hair – as you can see here.

Our jaws dropped when we stumbled across this cinnamon brown hair color. Using cinnamon brown as the highlights in combination to mocha brown is the pairing we didn’t know we all needed in our lives.

Switching things up a bit with cinnamon brown mixed with blonde highlights. Hello gorgeous! We love the brightness the blonde pieces add to cinnamon brown hair. Perfection for the spring and summer seasons.

We’re going to keep you surprised slide after slide here, because there are so many creative ways to incorporate cinnamon brown into hair. Here, they opted for a reddish tone that really encompasses the spiciness of cinnamon.

Mixing different shades of brown together is an incredible way to make your hair stand out from the rest. Not only that, it gives you an opportunity to really customize your brown hair color. Here they mixed chestnut and cinnamon brown for an epic look.

Talk about a moment! This cinnamon brown hair looks red hot with blonde highlights. Notice how the red tones really pop with blonde added to the mix?

This is a complete change from the previous image – which really goes to show just how versatile cinnamon brown hair can be! The soft light cinnamon pieces applied surrounding the face here adds a soft, pretty aesthetic.

Lighten up dark brown hair with cinnamon brown highlights mixed in throughout the hair. Here they used the balayage technique to add highlights and as you can see, it looks amazing.

Add cinnamon highlights in different ways for a unique take on the trend. This look brightened and lightened the lower half of the hair with cinnamon brown toned lowlights. It gives this gorgeous, warm toned pop.

WOW we are in love with this all over cinnamon brown hair color. Isn’t it everything? Because of the cinnamon tone it adds this reddish hue to the hair that makes it different from your average brown hair color.

If you have long hair, and you want to add some cinnamon spice to your locks – this is perfection! The mix of chocolate brown with cinnamon brown gives long hair an added boost of style and dimension. We love that there are some extra cinnamon toned pieces around the face, too.

Even adding just a subtle hint of cinnamon brown to dark brown hair can be enough to change the entire aesthetic of your hair color. This is a great example of that! Deep espresso brown hair, while gorgeous as is, gets new life with this hint of cinnamon.

Gorgeous hair color alert! Have your colorist mix in a few different tones of cinnamon brown hair to get the depth you see here. Because some pieces are lighter, while others darker it creates this gorgeous illusion.

Whether your hair is curly, straight, wavy or something in between – cinnamon brown highlights has a way of elevating the look of your hair’s natural texture. Because it gives this soft warmness to hair it’s a major win!

We sure hope you haven’t had enough variations of cinnamon brown highlights, because we have some more to share with you. This is another unique way to adapt highlights using the warm brown shade.

Notice how easily cinnamon brown gives dimension to hair? We’re in love! The cinnamon brown highlights aren’t as prominent, but that’s what gives the hair color this subtle dimension.

Another way to add cinnamon-brown highlights, subtly. We know the dramatic hair coloring isn’t for everyone and wanted to show you all the ways cinnamon brown can be used for any personal style preference.

Kylie Jenner is a style MAKER, to say the very least. She’s never been one to shy away from experimenting with her hair color. We have to say this cinnamon brown color may be one of our favorites we’ve seen on the star.

It’s all about a good color mix! Seriously though, how epic is this hair color? The combination of very different shades/tones of brown makes this a really unique color. Cinnamon brown adds this warm brightness.

Here we go with a darker take on the trend. Pretty, right? We just love that cinnamon brown, like many other shades of brown, can be adapted in so many ways that allows anyone to make it work for their personal skin tone and style preferences.

Hello gorgeous! These cinnamon brown locks are RED HOT, in our opinion. This color is really pulling out some of that spice (aka red) tone cinnamon brown is so good at doing.

This color has that reddish hue to it, but it a way that’s a bit more neutral from the previous image we showed you. Notice it still has that spiced effect? So pretty!

We don’t know about you but we’re officially sold on the cinnamon spice element of this hair color trend. What’s not to love about it though, right? It’s warm, rich and SPICEY!

These locks are giving us cascading cinnamon vibes, and we’re here for it. Again with an example of mixing more than one specific shade of brown to get this epic result. 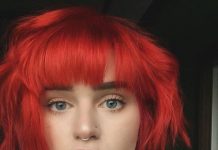 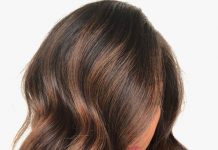 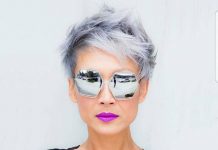 Kat Jorie - December 14, 2020 2
Manic Panic Colors 101 With an incredible range of colors and products that are 100% vegan and cruelty-free, Manic Panic semi-permanent hair dye is one of...

Nicole Eve Brown - November 22, 2019 107
40 Crochet Braids Hairstyles | Crochet Hair Inspiration Crochet braids made a huge debut in 2016 and it looks like they are not going out of...

Jane Schwartz - September 10, 2019 0
12 Best Shampoos for Keratin Treated Hair | Best Keratin Shampoo and Conditioner Reviews Want to know how to maintain and style your hair after...

Gemma - August 12, 2019 0
Keratin Hair Mask and Deep Conditioner Reviews If you have recently had a keratin treatment, you are probably enjoying having manageable, silky, and smooth hair...

Cute Little Girls Hairstyles When it comes to hairstyles for little girls, there are so many cute options that are full of personality, and the results...

25 Updo Hairstyles For Black Women | Black Hair Updos Inspiration Wearing your hair up can feel tired. If you find yourself thinking, "ugh, another ponytail",...

Short Hairstyles for Fine Hair If you've got fine hair, each individual strand is relatively small in diameter. This probably means your hair has a...

30 Shag Haircuts And Hairstyles One of the most popular looks of past decades, shag haircuts have enjoyed their time as a trendy style, in...