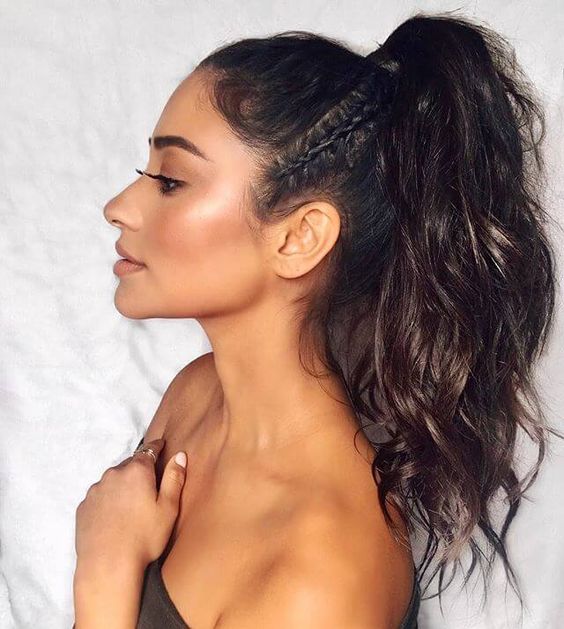 Ponytails are definitely not a new hairstyle concept. We’re all well versed in the idea of throwing your hair up in a ponytail when you want or need your hair out of your face. While the easy breezy ponytail, when you’re heading to the gym, is a classic we wanted to share some hair inspiration. Dramatic ponytails have become a big trend and we want to keep you on the cutting edge with over 30 high ponytail hairstyles to give a try this year. Scroll through for some major high ponytail inspo!

Sleeked back ponytail gets a little remix! We absolutely love the additions to this ponytail. Styling a skinny braid on top, wrapping the base of the ponytail AND accessorizing with a word rhinestone pin – they all work together incredibly.

For the ladies who want to keep their ponytail a little more on the casual side, this is for you. Rocking a messy/beach wave ponytail hairstyles is one of those go-to looks every woman leans on. A great way to elevate this ponytail is by tying a bandana. Simple but look at how it transforms the aesthetic!

Accessories are a great way to give high ponytails a different look. We love the way tying a silk printed scarf gives the ponytail a touch of print. The ponytail gets a completed look using hair to wrap around the hair tie, too.

Let’s face it, Beyonce is the Queen of incredible hair. She always steps out looking incredible and starting new hair trends. This high ponytail look is no different. We’re all about the side ponytail type of look with the hair pulled to the side for a bit of a different twist.

How stunning is this high ponytail hairstyle?! Styling a loose dutch French braid down the center, on top of the hair, and working that into the high ponytail. Add to the undone aesthetic of the braid by leaving some pieces out around the face and adding a texturizing product to your hair to get that beachy feel.

This high ponytail hairstyle is a major standout, if you ask us. Aside from the incredible hot pink color, the hairstyle itself is pretty epic. You’ve seen braided ponytails, but this is a whole different take on that style. Styling braids UNDER the ponytail, and styling two braids adds so much drama to a simple ponytail.

Looking for a pretty, sophisticated ponytail hairstyle? We have you covered with this gorgeous style. Start by adding big curls to your hair. Pull your hair back into a sleek ponytail, leaving a couple of simple strands out near the ears. Complete the hairstyle with a simple bow tied around the hair tie – such a pretty touch.

Talk about a show stopping ponytail! We’re in love with this. The ponytail itself is still simple, because it’s all about the top styling detail. The tiny braids are optional, this style would look just as great without them thanks to the gold embellishments.

One braid is fun, but three braids even more style to a ponytail! As you can see here, the additional braids on top really gives this the perfect touch. Gorgeous for a special occasion or a night out!

How fun is this ponytail?! Adding a couple of other hair ties to the hair in the ponytail like this gives you that fun bubbled up look. Instead of leaving just the hair ties, use a small part of hair from the ponytail to wrap around it to give a more completed look.

Give your hair a glammed up look with this stunning ponytail. Begin by adding polished curls/waves to your hair and then pulling all your hair back, leaving one piece out in front, into a sleek ponytail. Finish off the look with a glam hair clip on one side of the pony.

Corn row braids + ponytail = amazing! We’re all about the unique placement of the corn row braids in this ponytail hairstyle. With the braids being on the side it adds an asymmetric look to the ponytail that really transforms it.

Switch up your ponytail with braids…but not like we’ve shown you in previous slides. Here, they’re really stepping outside the box and styling braids on the bottom portion of the ponytail. You’ve probably seen a hairstyle like this with two French braids on top of the pony – this is a fun flip!

Ponytail hairstyle turned edgy. Side braids get a bit of an edgy transformation here because of the way the hair is parted. When the hair is parted with these sharp lines, it gives braids this triangular shape that really adds that edgy feel. So chic!

The great thing about ponytail hairstyles is you can really keep them simple and achieve a gorgeous style. For this look, it’s really about the way the hair is pulled back into the ponytail that makes this look so pretty. Adding volume at the crown of the hair and leaving face framing pieces with a center part is what elevates this style.

Sleek pony update alert! We don’t know about you but we really love a sleek ponytail. The minimalist aesthetic is incredibly chic. Thanks to celebs everywhere, it’s also a trendy look. Give your sleek ponytail a little extra touch with an embellishment placed around the hair tie.

We’re sure you aren’t a stranger to the concept of leaving a couple of face framing pieces out from an updo hairstyle. It’s an easy way to add a little more of a finished look to hair. And, of course, to frame your face! Here we really love that they added a distinct center part with the pieces for even more dimension to the hair.

Glam hair doesn’t have to mean complicated hairstyles. This is a great example of that. What makes this ponytail glam is the high placement paired with sleek waves and the wrapped base. Many of the ponytails we’ve shown you have wrapped hair around the hair tie but we love the exaggerated take on this here for added glam.

There’s no denying the fact that hair pins have become one of the biggest hair trends of the year. Add just a touch of glam and fun to a party ponytail by adding a couple of pins to one side of the ponytail. The placement here doesn’t make the pins the focal point of the style, but more of a peek a boo effect.

JLo is another one of the Queens we all lean on for style inspiration. She always looks incredible and here she’s showing us to how to rock a braided ponytail like a true diva does. Instead of leaving the hair in your ponytail down, braid it for a sleek look.

Whether you want a hairstyle to go with a super casual outfit or if you’re heading to the gym and want to add a little more style to your hair – this is a great way to cover your bases! Popping a hat on is always a go-to for the days when you haven’t washed your hair or when you don’t want to fuss too much with your hair. We love the little braid mixed into the ponytail here for a little touch of fun.

Messy meets sleek with this ponytail hairstyle. You’re really getting the best of both worlds here, which makes this particular ponytail hairstyle one that you can wear casually or dressed up for a special occasion. Great way to get your hair out of your face and show off a bold lip!

Hello glam pony! We adore this glammed up version of a high ponytail. Adding big curls to hair is key to get this voluminous look. Pulling the hair back with this twisted style really changes the way the hair looks pulled into a ponytail. Of course, the addition of the big pearl helps too.

Who doesn’t love a good perky ponytail hairstyle?! We don’t know anyone. It’s one of those looks that’s simple but always looks great. Use a teasing brush or comb to add more volume to your ponytail and get that added perkiness.

Braid, ponytail AND a scarf?! Yes! We didn’t know we’d love all three of these elements combined but when they look as great as this hairstyle does, we’re in love. If you want to get this exaggerated braid size, use clip in extensions for more volume. Make sure to coordinate your scarf to the rest of your outfit!

Scrunchies are one of those hair accessories we didn’t think would ever come back into fashion. After their reign in the 90’s we thought they were gone forever, but we’re really glad they came back. Ponytails look so cute with a scrunchie tying hair back.

Braids are a great way to elevate almost any hairstyle. So often we see braids styled with a more exaggerated look, or where they’re the focal point of the hair. That’s why we actually really enjoy the subtly of this tightly styled braid on the side. It’s not the focal point at all, and is just a small unexpected detail.

If you WANT braids to be more of an intricate part of a ponytail hairstyle, this is a fun way to go about it. They’re still small braids, but because the rest of the hair is slicked back into a sleek ponytail the braids really stand out here.

Slick your ponytail back WITH curls. You’ve probably seen a lot of slicked back ponytails with hair that’s pin straight. That’s a gorgeous look, but for the ladies who like a little added texture in their hair add polished curls to the ponytail hair. Just make sure the curls aren’t too beachy to get this slicked back aesthetic.

We’ve shown you quite a few ways to add accessories to your high ponytail hairstyles. Using pins, scarves, etc. the options are limitless. Here, they went another route with small star clips. The fun thing about this particular accessory is how they can be added throughout the hairstyle for added glam.

Short Hairstyles For Black Women With Round Faces

Jane Schwartz - December 5, 2022 0
Best Leave In Conditioner For Curly Hair ReviewsLeave-in conditioner is designed to provide additional moisture and nourishment to the hair. One of the main...

Jane Schwartz - November 17, 2022 0
Best Hair Thickening Shampoos Product ReviewsIf you want to take care of your thin fragile hair and add volume or give it a thicker...

Jane Schwartz - April 10, 2022 0
12 Best Shampoos for Keratin Treated Hair | Best Keratin Shampoo and Conditioner Reviews Want to know how to maintain and style your hair after...